Kathleen Parker Is Out At CNN 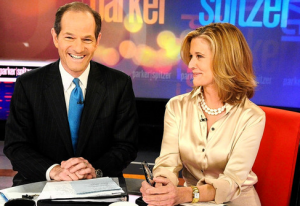 After months of turbulence at CNN’s Parker Spitzer, the network will drop co-host Kathleen Parker from the show, according to sources and a memo released to CNN staff. Eliot Spitzer will continue with the show. “I wish Kathleen all the best in continuing on with her spectacular career. It has been a joy working with her as a teammate, and I continue to be a huge fan of the wisdom that jumps from her written work and the wit, charm and insight she brings to all that she does,” said Spitzer in a statement.

According to CNN chief Ken Jautz, the new show will feature Spitzer in an “ensemble format” of contributors and be called In the Arena. The new show debuts Monday.

Jautz says Parker “decided to leave the program to focus on her writing, and we have decided to take the show in a new direction.” Parker released a statement that called this “a good time to move on,” and makes no mention of Spitzer:

After bringing viewers a new 8pm show on CNN, I have decided to return to a schedule that will allow me to focus more on my syndicated newspaper column and other writings. While I am extremely proud of the show we created, and the subject matter and level of discourse Parker Spitzer promoted every night, it was a difficult decision to scale back my column a few months ago and, with the show going in a new direction, it is a good time to move on. I want to thank the viewers who have been so kind with their comments and support. I will continue to appear to contribute and analyze occasionally on CNN and look forward to continuing my relationship with CNN and the many talented individuals I have worked with here.

I want to share with you some news today regarding our 8pm show. Kathleen Parker has decided to leave the program to focus on her writing, and we have decided to take the show in a new direction. We will be adopting an ensemble format with several newsmakers, guests and contributors joining Eliot Spitzer each night. The new program will be called, “In the Arena,” beginning Monday. E.D. Hill and Will Cain will join the program as well others within and outside the CNN family.

We have been pleased with how the 8pm hour has become a centerpiece of substantive, policy-oriented conversation, and we are looking forward to building on that with this new format. Simply put, the new program will look beyond the headlines to analyze and discuss the most important stories of the day. The program will provide context and analysis through balanced and thoughtful discussions and interviews with a wide range of guests and newsmakers who cumulatively represent various points of view.

Kathleen will continue to appear on CNN occasionally to provide her insights and commentary. We thank Kathleen for her hard work and all that she has done to help us launch our new 8pm program. We respect her as a colleague and appreciate her perspective and contributions.