Breaking: Keith Olbermann Is Still Not A Fan Of Fox News 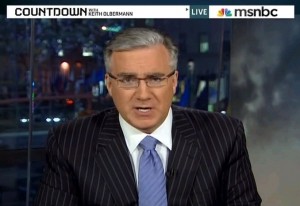 Here’s a shocker for you: Keith Olbermann is taking issue with Bill O’Reilly‘s proclamation that Fox News “is the most powerful media agency in the world.” On Countdown tonight, the MSNBC host took a few minutes to dissect that claim—though his comments didn’t exactly have the effect he intended them to have.

Here’s what Olbermann had to say in response to a clip of O’Reilly’s Fox boast:

“Interestingly, the thing O’Reilly thinks Fox has—power—power to do what, exactly? Since Fox launched, it helped a speaker of the house get a president impeached. The guy actually lost his job—that would have been the speaker of the house, and his successor. Then Fox championed a Republican presidential candidate who finished second in the vote. Then Fox demanded a war and got it, at the cost of 4,400 American lives. Then Fox championed an incumbent president riding the waves of two wars and terror panic who just barely won reelection.”

There’s more, but you get the idea. Basically, Olbermann blames Fox News for every Republican blunder of the late ’90s and the early to mid-2000s, then claims that the network is powerless because Obama was elected in ’08. He also tries to spin 2010’s midterm election results so that they sound like a disappointment for the right: after all, says Olbermann, conservatives “only” won one house of Congress on November 2.

If Olbermann was trying to prove that Fox News isn’t a powerful media agency, why would he blame that channel and that channel alone for everything from George W. Bush’s election to the collapse of the economy?