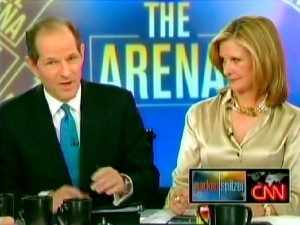 The jokes have been made, and the ratings are not strong: Eliot Spitzer has starting to look like cable news’s piñata. In fact, it’s not unreasonable to think that Parker/Spitzer‘s days on air are numbered, at least in its current iteration. But despite the sturm und drang and predictable drama that comes with a new cable news show, I think that there is one unspoken truth to be gleaned from this whole enterprise: Former New York Governor-turned-cable news host Eliot Spitzer is very good on television.

Last week the NY Post reported that there was tension on the set of Parker/Spitzer that allegedly culminated with Kathleen Parker‘s “storming off the set.” The reason behind the alleged fuming? Parker was reportedly angry that the show’s producers weren’t playing up her strengths on the struggling show, implying that her co-host was getting far more than his fair share of airtime.

Anyone who has watched the show can tell you that Ms. Parker has a point. Eliot Spitzer is a lot more vocal throughout the course of any given episode of Parker/Spitzer. But most viewers of said show (or, as some wags might say, both viewers) would likely also add that the show would greatly benefit from having more Spitzer, not less. When a cable news program that is focused on the issues of the day, it helps to have a co-host that has a clear command of those issues. Whether it be stimulus spending, tax cuts, or even leaked government documents, the former Governor of New York has the wisdom of experience in dealing with these issues, and it shows onscreen.

Though the show is just over a month old, the examples of Spitzer showing off his smarts are already starting pile up. Most recently, he had on as guest Senator Lindsey Graham, who casually suggested the notion of having permanent military bases in Afghanistan. Spitzer immediately recalled pre-war political rhetoric in a way that clearly was not coming from a control room through his ear piece.

There was also Spitzer’s discussion with Texas Governor Rick Perry over letting states opt out of Social Security, or Spitzer’s declaration that Tim Geithner should be fired on the premier episode of the show.

The reported frustrations felt by those attached to the show surely stem from its poor ratings. While many shows open with few viewers, there is no question that this one can’t last with such consistently low numbers. Sources inside CNN say that a larger reason for the discontent on the set is a reflection of different styles of the hosts. They say that Spitzer understands the collaborative nature of television. Coming form a career in government, it makes sense that he would understand the importance of building a consensus, unlike Parker, who is well-liked but has been been writing columns alone for years.

There are legitimate critiques with both Spitzer and his show. Critics point out that Spitzer’s arguments are often too lawyerly for cable news, and that the former New York state Attorney General plays within the multiple shades of gray on any given issue. Aditionally, his sharp intelligence can be too pointed at times for, his edges in need of softening by a co-host to become more welcome in America’s living rooms. Alas, Parker is the wrong kind of soft – her points of view seemed to be honed from a year of writing multiple drafts, not the sort of exercise that prepares one for the quick and pithy environment of live television. She’s clearly smart, but maybe not the right kind of smart for hosting a television program.

Let’s be clear – Eliot Spitzer is not a natural television host either, but his broad understanding of multiple topics in the news, his willingness to sometimes take unpredictable positions, and no nonsense demeanor together make him a rarity in today’s cable news landscape.