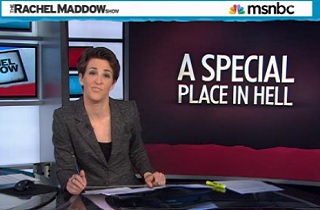 MSNBC host and ratings anchor Rachel Maddow is known for many things; her progressive politics, her intelligence, a unique-to-cable news storytelling style. Beyond those things, though, Rachel Maddow is known to abide by the third rule of Patrick Swayze‘s Road House character: be nice. Don’t get me wrong, she’s not the dippy, sunny kind of nice that gets you a spot on some breakfast news show. Rachel can deliver a withering assessment with the best of them, but she does it differently.

Rachel Maddow doesn’t sneer or rant, she builds a series of narrative dominoes, then knocks them down with a whisper. She’s so even-tempered, she makes Barack Obama look like Frank Booth, as evidenced by her cool handling of Republican strategist Alex Castellanos awhile back. Faced with condescension that would have gotten most people in a slapping mood, Rachel was clearly unhappy with Castellanos, but she was nice. That niceness is one of the key reasons she counts many conservatives among her fans.

One of the endearing ways this manifests itself is in an almost compulsive inability to use anything remotely approaching profanity. Tuesday night’s The Rachel Maddow Show saw a rare exception to that, as something had Rachel mad enough to describe herself as “pissed.”

If you’re not a regular viewer, this might not seem like such a big deal, but if you know the lengths she will go to in avoiding even quoting a mild vulgarity, the declaration rang out like a gunshot. She won’t even say “ass” on the air, but the opening essay from last night’s show got Rachel so worked up, she told guest Rep. Tammy Duckworth (D-IL) that “You can probably hear me getting all riled up, being pissed” about the stories she had just detailed.

Last night’s show diverged from Rachel’s usual even temper in another way. One technique that she uses is to begin her essays with a graphic punchline, then meticulously fill in the setup, so that punchline pays off slowly, repeatedly, and completely. On Tuesday night, the graphic read “A Special Place in Hell.”

You’ve really got to be a special kind of scum to get Rachel Maddow to wish for you to go to a special place in Hell (not heck), but given the subject matter, it’s actually not all that surprising. As is entirely proper, Rachel Maddow has a special place in her heart for military veterans, and she has consistently translated that passion into action, covering the wars and their aftermath when the rest of the media was ignoring them. On Tuesday night, Maddow’s essay was about scam artists ripping off veterans through fake charities like Allied Veterans of the World, which robbed millions from donors who thought they were helping vets.

From there, though, she went on to detail the way sequestration is hurting service members. From The Huffington Post’s Sam Stein and Amanda Terkel:

The Army announced on Friday that soldiers would no longer be able to submit new requests for tuition assistance. The decision will exempt those service members already enrolled in courses and receiving aid.

“The Army understands the impacts of this action and will re-evaluate should the budgetary situation improve,” said Lt. Col. Tom Alexander, spokesman for the Army’s personnel chief.

The decision to put an end to the educational benefits program is the latest indication that the effects of sequestration will, indeed, be felt deeply, despite early chatter that the impact was overblown.

Maddow also talked about the unconscionable backlog and wait times for returning veterans’ benefits claims, and concluded that if we think we’re doing right by our veterans, then “…you and I are scamming ourselves, as much as those grifters scam their marks, and there ought to be a special place in Hell for messing that up.”

If that pissed Rachel Maddow off, something else went down yesterday that will absolutely unhinge her. More on that later.

Here’s the clip, from MSNBC’s The Rachel Maddow Show: