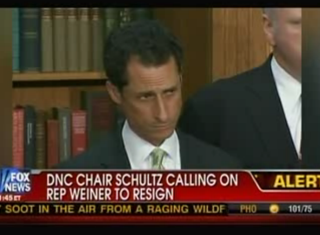 After a week of tense silence from the Democratic leadership, House Minority Leader Nancy Pelosi and Democratic National Committee chair Debbie Wasserman Schultz have stated their wish for Rep. Anthony Weiner to step down from his position in Congress. This statement comes in light of the recent discovery that the police are currently investigating his interactions with an underaged girl over the internet.

Rep. Pelosi’s statement urges the Congressman to “seek the help” he needs “without the pressures of being a member of Congress,” and comes at the tail end of the DNC leader’s demands that, for “his and his family’s well being,” his “continued service in Congress is untenable.” Wasserman Schultz also called his behavior “indefensible” and the event a “sordid affair.”

Below the report of the news from Fox News, and both Congresswomen’s statements:

“Congressman Weiner has the love of his family, the confidence of his constituents, and the recognition that he needs help. I urge Congressman Weiner to seek that help without the pressures of being a Member of Congress.”

“It is with great disappointment that I call on Representative Anthony Weiner to resign. The behavior he has exhibited is indefensible and Representative Weiner’s continued service in Congress is untenable. This sordid affair has become an unacceptable distraction for Representative Weiner, his family, his constituents and the House – and for the good of all, he should step aside and address those things that should be most important – his and his family’s well-being.”