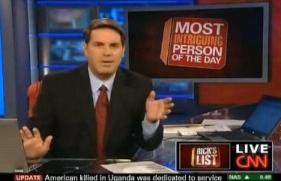 “Rick Sanchez is no longer with the company. We thank Rick for his years of service and we wish him well.“

They will broadcast CNN Newsroom from 3-5pm for the foreseeable future.

CNN’s Rick Sanchez is not happy with being made fun of constantly on The Daily Show and Colbert Report. It is from this jumping off point that he absolutely unleashed on Jon Stewart and Stephen Colbert, and at times his own network, on Pete Dominick’s satellite radio show yesterday.