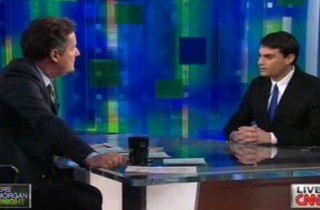 Breitbart.com Editor-at-Large Ben Shapiro appeared on CNN tonight and accused host Piers Morgan of “standing on the graves of the children of Sandy Hook” in his pursuit to “demonize” the pro-gun advocates who argue against stricter gun control legislation in the wake of the school shooting.

“You have kind of been a bully on this issue, because of what you do, and I’ve seen it repeatedly on your show,” Shapiro said immediately out of the gate. “I watch your show. And I’ve seen it repeatedly. What you tend to do is you tend to demonize people who differ from you politically by standing on the graves of the children of Sandy Hook, saying they don’t seem to care enough about the dead kids. If they cared more about the dead kids, they would agree with you on policy.”

He continued to tear into the host: “I think we can have a rational, political conversation about balancing rights and risks and rewards of all of these different policies, but I don’t think that what we need to do is demonize people on the other side as being unfeeling about what happened at Sandy Hook.”

Of course, Morgan took issue with such a characterization: How dare you accuse me of standing on the graves of children who died there,” he said. “How dare you.”

“I’ve seen you do it repeatedly, Piers,” Shapiro insisted.

Shapiro did not back down from his criticism, telling Morgan, “Well, I mean, you can keep saying that, but you’ve done it repeatedly. What you do, and I’ve seen you do it on your program, is you keep saying to folks if they disagree with you politically, then somehow this is a violation of what happened in Sandy Hook.”

He then challenged the CNN host to present policy ideas as opposed to demonizing his opponents: “I would really like to hear your policy prescriptions for what we should do about guns because you say you respect the Second Amendment,” he said before presenting a pocket version of the Constitution. “I brought this here for you so you can read it,” he said.

“I would really like for you to explain to me what you would do about guns that would have prevented what happened in Sandy Hook,” Shapiro continued. “If you want to do what you did in the U.K., which is ban virtually all guns, that is at least a fair argument and we can have a discussion about whether that’s something that we ought to do or not.”

Morgan’s response: “I made it clear what I want to do, which is exactly what [retired Rep. Gabrielle Giffords‘ husband] Mark Kelly wants to do. And, in fact, rather than address your comments to me about standing on the graves of children at Sandy Hook, you can address them to Mark Kelly because he agrees with everything I have been saying because he feels the same way, as does his wife.”

After stating that “assault weapons” were used in the four latest nationally-publicized shootings, Morgan said, “You can smirk at me and you can laugh at me, and you can accuse me of standing on the graves of dead children, but that’s the reason that people like me and Mark Kelly and Gabrielle Giffords want to have assault weapons like that removed from civilian hands.”

“Your passion on the issue doesn’t really justify the rationale for why you want to ban assault weapons,” Shapiro shot back.