Brent Bozell To Eliot Spitzer: ‘How Can You With A Straight Face Tell Me You Don’t Have A Bias’ 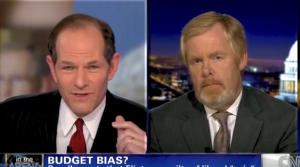 Brent Bozell, President of the conservative Media Research Center, appeared with Eliot Spitzer last night and argued that Spitzer, along with the rest of the “liberal media,” has displayed bias in favor of the Democrats throughout the entire budget battle. Spitzer was determined to defend himself against specific accusations from Bozell, yet Bozell was just as persistent in trying to get Spitzer to realize that he demonstrates a bias in favor of liberals.

In the case to exonerate himself from the charge of being bias, Spitzer showed “Exhibit 1,” a clip where Spitzer blamed Democrats for the current budget dispute because of their inability to pass a budget last year. Bozell was not impressed, arguing one good clip does not balance out the hundreds of counter-examples. Bozell continued:

“I’m not saying it’s been 100% liberal and zero conservative. I haven’t said it’s zero fair at all times, what we’ve said is it’s overwhelming the bias and you can’t deny it Eliot, you can’t. It’s actually overwhelming on your side.”

When Spitzer continued to argue that he is fair and holds everybody accountable, Bozell laughed and said “how can you with a straight face go on this show and tell me you don’t have a bias, that’s what you were hired to have.”

Spitzer and Bozell argued over several other specific instances including whether Spitzer wrongly exploited a military wife or used scare tactics to promote the Democratic agenda. Bozell concluded, “my goodness, you all have such great fact-checking when it comes to Republicans and conservatives, where’s the fact-checking with [President Obama’s] record?” Bozell may not have been successful in convincing Spitzer that his show is biased, but Spitzer at least deserves credit for giving airtime to his critics in an entertaining segment and attempting to be responsive to their complaints.