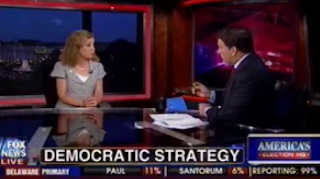 Wasserman Schultz argued that the American people were more interested in stopping the Paul Ryan budget, which “ends Medicare as we know it.”

“The Senate is not taking up a budget,” Baier observed. “(Harry Reid) said he will not take up a budget, a budget will not move to the floor this year, he said that in February, it’s done, we don’t need to do it, and it’s clear now they’re not doing it, what about that.”

“Focusing on process is not what the American people are interested in. What they’re interested is making sure the Romney-Ryan budget, that ends Medicare as we know it, that would allow student loan interest rates to double [doesn’t pass],” Wasserman Schultz shot back.

“Will you get the people sitting at home that say, hey listen, we understand that you have a problem with the Ryan budget,” said Baier. “There’s not a Democratic budget on the table.”

“But it’s not being voted on,” Baier contended.

“That’s right because the House Republicans –” she began.

“I don’t speak or tell Harry Reid what to do,” Wasserman Schultz hit back. “What we have to do here is make sure there are two budgets, two different directions that we can go November 6 and leading up to November 6. The Romney-Ryan budget, which Mitt Romney has fully embraced which takes us back to the failed policies of the past.”

“You know how Congress works,” Baier pointed out.

“Have Harry Reid or a Senate Democrat on your show and ask them about it,” Wasserman Schultz replied sharply. “And I’ll continue to make sure to speak for the Democrats.”