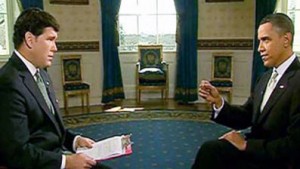 The first part of the much-anticipated Fox News exclusive interview between Bret Baier and Pres. Barack Obama took place at the top of Special Report, and although it couldn’t be viewed as contentious, there was so much interrupting it caused Baier to acknowledge the tactic at the end of the interview.

Here’s a breakdown, and video:

The interview was cordial but combative at times, as Baier interrupted the President as he veered into more general answers. At one point, Pres Obama said, “Bret, let me finish my answers here.”

But the tone of the interview was essentially about substance vs. process. Baier pressed Pres. Obama on the “deem and pass” strategy. “So you support the deem and pass rule, you’re saying that that’s that vote?” Baier asked.

“What I’m saying is whatever they end up voting on, I hope it’s sometime this week, I hope it is a vote for or against my health care proposal, and that’s what matters, and that’s what people will ultimately judge this on,” said Pres. Obama.

But pressed again on process, Obama relented. “I don’t spend a lot of time worrying about what the procedural rules are in the House or Senate,” he said.

Later, he called conversations like the one he was having with Baier “frustrating,” and finally said, “I’m confident we’ll pass.”

Before he shook the President’s hand, Baier said, “I apologize for interrupting you so much, sir, I was trying to get the most for our buck.”

After the interview, the former Special Report Brit Hume weighed in. “He really didn’t answer your question in any satisfactory way,” he said, sympathizing with Baier’s position of having to interrupt the President of the United States in the nicest way possible. Hume was right – while Obama had answers for some of Baier’s specific questions about what was contained in the bill, he wouldn’t comment on the process. Maybe it won’t matter in six months looking back, but in this moment, it is still relevant and valid. Baier came off looking sharp and prepared in what was likely his most high-profile interview ever. Still, Obama stayed on message and once again demonstrated his relaxed command of the issues.

Here’s part one of the interview (all health care – part two was about Israel, Iran and Tiger Woods):