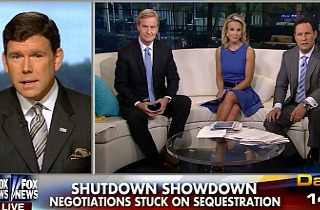 Fox News Channel anchor Bret Baier joined the hosts of Fox & Friends on Monday to update them on where negotiations to increase the debt ceiling and avert a default are after the weekend. He said that there is a growing consensus in Washington D.C. that a deal is so far off that a default “may actually happen.”

Baier began by noting that the optimism of last week evaporated over the weekend as negotiations in Congress failed and a series of proposals which would raise the debt ceiling were floated but eventually collapsed.

He observed that Democrats in the Senate have begun demanding that pre-sequester level spending be restored as part of a deal which raises the debt ceiling, but this is a condition unacceptable to Republicans in the House.

Brian Kilmeade said that an NBC News/Wall Street Journal poll which showed Democrats winning the public opinion battle over the government shutdown prompted them to make these demands.

“So they move the goal post to a place where even Democrats are saying, ‘I think this is overreach,’” Kilmeade said.

Baier observed that there remains a “glimmer of hope” that a short-term deal could be worked out.

“For all of the people who think there is just going to be some solution automatically, there are more people in the camp of ‘Wow, this may actually happen,’” Baier concluded.