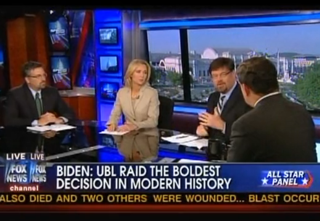 Vice President Joe Biden‘s praise for the President’s decision to raid Osama bin Laden‘s home– a decision he described as “the boldest undertaking any president has taken in any event in modern history”– has on the Democratic side blanketed many issues beyond homeland security. On tonight’s Special Report, the (mostly conservative) panel took objection to the idea that this one issue would translate to a mandate in domestic policy, arguing Americans are not that “stupid.”

Host Bret Baier asked the panel to evaluate how much Vice President Biden’s words would resonate with Americans, and the objection began nearly immediately. “By the end of the campaign,” Weekly Standard editor Steve Hayes noted, “every answer is going to be ‘Osama bin Laden.'” Hayes argued that the main line of attack by Democrats from now until November 2012 will be “this was the president that had the fortitude to make a decision when the outcome was uncertain,” and he posited it would work. “It undercuts the chief Republican critique of Obama, he noted, that he is “weasely and vacillating.”

The other two panelists seemed to agree, at least with the fact that Democrats would choose this line of attack. The Hill‘s A.B. Stoddard added that she saw Vice President Biden’s speech as part of the “[Obama 2008 campaign manager] David Plouffe strategy” to merge every controversial issue such that the victory in Pakistan would relate, but the National Review‘s Jonah Goldberg differed in how he saw the potential success of the tactic. “I don’t buy that the American people are that stupid,” he argued, “that they’re going to believe that because he killed Osama bin Laden we have to buy into his energy program.”