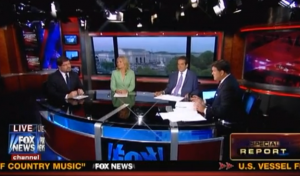 Amid ongoing negative campaigning, Bret Baier asked his panel on Monday to weigh in on how effective some specific attacks are. While the panel didn’t necessarily agree on everything, they each shared bleak outlooks about how President Barack Obama‘s offensive campaigning has backed Mitt Romney into a defensive corner.

The National Review’s Jonah Goldberg argued that the attacks exchanged over the Bain Capital issue aren’t ones that resonate with voters — but noted the case is different when it comes to insiders who, he said, are wondering how Romney let the situation get so out of hand. How he got to a place where he has to repeatedly defend his Bain record.

“Truth doesn’t have a place in this election,” Charles Krauthammer chimed in, citing “falsehoods” spread by the Obama campaign. That being said, he conceded that Obama’s outsourcing attack is effective because it “plays to the fear of the other.” Obama blames it on the other, Krauthammer said, “and he’s succeeding.”