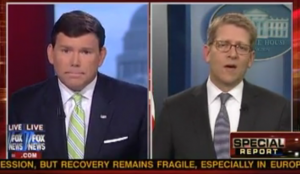 President Obama had fighting words about Paul Ryan‘s budget, and Jay Carney spoke to Bret Baier on Tuesday to discuss it. As Carney defensively cited the president’s “balanced” approach, Baier sparred with him, pressing him on the Senate Democrats’ inability to pass a budget despite having enough votes.

Baier led off the interview by asking Carney about Ryan’s response to the president’s remarks about his budget. Carney said he’d ask Ryan to “respond with the same specificity, the same reliance on math and facts as the president presented in his speech today.” The Ryan plan, he said, says, “we’re going to give massive tax cuts to the wealthiest Americans and somehow pay for them with unspecified closing of loopholes.” It’s “not responsible” budget presentation, he concluded. Carney continued, saying Ryan’s budget represents “a situation of the Republican party where what used to be the center of the party has disappeared and realigned itself with what is a very conservative vision that’s outside of the American mainstream.”

“You say ‘responsible budget presentation,'” Baier said, pointed out that Democrats put forward a budget that failed in the House with a 414-0 vote. “Senate Democrats have not passed a budget resolution in 1,070 days,” he said. “Why?”

“Come on, Bret,” Carney said, “you cite — and I know that you often do — the statistics that represent gimmickry and stunts.” Baier interrupted, asking, “What’s gimmickry about not passing a budget in the Senate?” Carney said, “It is our preference that Congress work and the Senate effectively pass a budget.”

“So why doesn’t the president call Harry Reid and say, why don’t we get a budget on the table and vote on it?” Baier asked. Carney replied: “Bret, I know that’s what you want to make this segment about.” He then reverted to the talking point about the president’s balanced approach before Baier stepped in and said, “The question is about Senate Democratic leadership, Jay. Harry Reid controls the Senate.” Visibly frustrated, Carney asked, “Bret, am I answering the questions?”

Nonetheless, Baier continued: “Why doesn’t he put something close to the president’s budget on the table in the Senate and pass it? 51 votes, he has the votes.” Carney responded by pointing out Republicans’ refusal to engage in bipartisan negotiation, and Baier pointed out again, “Democrats could vote on a budget and pass it.”

“I know that’s what you want to make this about,” Carney reiterated. “You know the only way in modern-day Washington to achieve a significant budget compromise is when both parties are willing to work together.”

Conceding “we’re not making headway on this point,” Baier then pivoted to the Obama’s remarks about the Supreme Court’s ObamaCare decision. He asked, “Did the president misspeak?” Carney launched into a lengthy response:

No, he didn’t. […] what was missing in the piece that led off your broadcast was the fact that the attorney representing the government in response to the question from the judge answered yes. Of course, we believe that the Supreme Court has, and the courts have, as their duty and responsibility, the ability of striking down laws as unconstitutional.

Baier asked about the appeals court that is challenging Obama’s comments and ordering the Department of Justice to submit a response by Thursday addressing whether the president believes courts have the power to strike down federal law. Carney said he hasn’t spoken to anyone at the Justice Department.