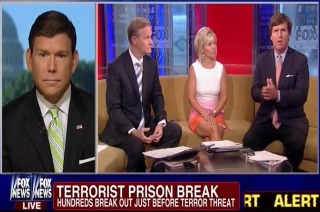 On Monday, Fox News Channel anchor Bret Baier joined the hosts of Fox & Friends to expand on the terror warnings which resulted in the closure of a large number of American embassies abroad and a State Department warning urging Americans to take caution when traveling overseas. Baier responded in the affirmative when asked if National Security Advisor Susan Rice took a lead role in the decision to close the embassies, agreeing that the administration was taking “a kind of do-over” for what happened in Benghazi almost a year ago.

“We saw reports this morning – I don’t know if they’re true – but, National Security Advisor Susan Rice was one of the driving forces behind this decision to shutter these embassies and consulates, almost 30 now,” said Tucker Carlson in an interview with Baier. “This, according to reports, was a reaction against what happened in Benghazi, a kind of do-over.”

Baier replied that they have spoken with three sources who have confirmed Carlson’s characterization of the embassy closures. “Either that’s exactly what’s happening or this is what the administration wants to put out that’s happening,” he added.

“According to the reporting that we have, she is very concerned that this is Benghazi all over again and does not want to — was one of the driving force of closing all of these embassies behind the scenes,” Baier said of Rice.

The Fox hosts observed that this latest Al Qaeda warning calls into questions pre-election claims made by President Barack Obama and his allies that the terror group was on the run and close to defeat.