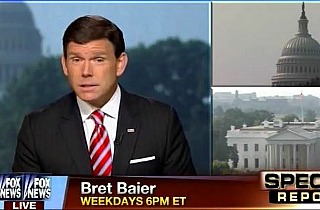 On Tuesday, Fox News Channel anchor Bret Baier summed the developments in President Barack Obama’s administration’s push for intervention in Syria. In the last 24-hours, Baier reported, the administration’s push for intervention changed from being imminent to avertable by virtue of a late-breaking “agreement” with Russia to supervise the surrender of Syria’s chemical weapons into international custody. Baier said that it was “tough to stomach” the administration’s shifting strategy relating to Syria and their claims that their strategy has always been consistent.

“It’s almost a case of whiplash here in Washington,” Baier reported. “Why isn’t this the U.S. proposal to solve the Syria chemical weapons deal? It is the Russian proposal.

“Why didn’t, if the president, as he said to Chris Wallace and five other anchors, talked with Vladimir Putin about this at the G20 conference and that this idea is a continuation of that conversation, why hasn’t that even come up?” he continued.

“Several people I’ve talked to said this was all part of a grand scheme and that rollout was really a way that the administration could orchestrate this, and the Russians could steer the Syrians and all this kind of spin behind the scenes,” Baier revealed. “It’s just tough to stomach all of that watching how it transpired, and how much power Russia is now given on the world stage of steering this diplomatic effort.”

Baier added that Democrats on Capitol Hill concede to him that Obama’s message on Syria has been “muddled” from the beginning.