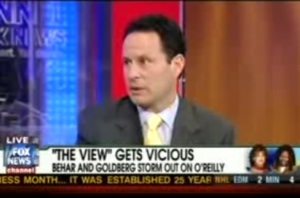 Yesterday’s blow-up on The View between Bill O’Reilly, Joy Behar and Whoopi Goldberg has sparked an interesting discussion about semantics, politics and the power of words. During yesterday show, the conversation turned to the so-called “Ground Zero Mosque” and O’Reilly said “Muslims attacked us on 9/11,” greatly offending two of the co-hosts of The View. Both Behar and O’Reilly have explained their part in the kerfuffle, and today Fox & Friends co-host Brian Kilmeade got in the act, defending his FNC cohort by saying not all “Muslims are terrorists, but all terrorists are Muslim.” Huh.

“That debate is like our debate on training wheels. That was our debate, like, seven weeks ago. And they can’t handle the give and take of a debate. They were outraged that someone was saying that there was a reason, there was a certain group of people that attacked us on 9/11. It wasn’t just one person, it was one religion. Not all Muslims are terrorists, but all terrorists are Muslims.”

It should be noted that the following video comes from Media Matters, who has in the past, neglected to include proper context that changes the meaning of an entire quote. However, the video below is in of itself, a pretty clear example of what many feel is the dangerously oversimplified view and equally intolerant syllogism of terrorist = Muslim.

Just a refresher – a terrorist is someone who uses wanton acts of violence to cow and oppress a group of people, not unlike the Ku Klux Klan who used such tactics in the earlier part of last century. By comparison, many members of the KKK also were Christian, so had Kilmeade been around in the 40s and 50s when the lynching of African-Americans was still occurring, using his own faulty logic, he could have ostensibly said that “all terrorists are Christians.”

Words do matter, and when you are on a network of such dominant power and unprecedented political bent, one needs to be responsible for the words one uses. Kilmeade’s words, in this instance, are beyond irresponsible. They are reprehensible.