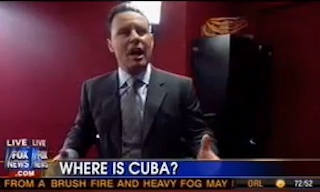 In one of the most awkward television moments in recent memory, Cuba Gooding Jr. arrived late for his interview with Fox and Friends — finally showing up on set at 8:56am — creating a frenzy for the morning show’s anchors.

Alarmed by the Academy Award winner’s tardiness, Brian Kilmeade led a search team throughout the Fox News studio to try to find out the actor’s whereabouts. “Where is he?!” exclaimed Gretchen Carlson. “Funny, Gretchen, would have been much better had he been there at this time. We would have walked in together and the drama would have been uncanny and I understand that he’s close to appearing on our show. We’d like him on the couch. But he’s not here yet,”

“Where do you think he is?!” Steve Doocy asked.

“Not really sure where he is,” Kilmeade admitted, combing the whole area — even looking in the closet.

“Is he down the hall? Is he still outside?” Doocy asked.

Finally, after vamping for what seemed like an eternity, Gooding finally arrived, blaming traffic for missing his interview.

“The good thing is we still have videotape,” Carlson said. “That means we can tape the interview with Cuba Gooding Jr. and we will air it for you tomorrow about his new movie Red Tails!”

“You’re going to be fantastic tomorrow, aren’t you?” snarked Doocy, as Gooding looked on sheepishly.

“Great movie, great career!” Kilmeade said. “So we’ll have a chance to go over everything and we only blame New York traffic!”

Awkwardness ensued. Needless to say, George Lucas is probably not amused by any of this.