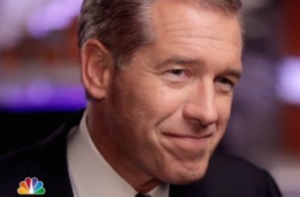 – A 22-minute newscast full of reporters in the field, taped packages and all the resources any anchor could ever need — making the job both as big and as easy as it gets in broadcasting.

Add it all up, and Brian Williams arguably had the best life of just about anyone in the world: Fame, fortune, looks, popularity, prestige, respect. Not too many score those two hat tricks at once in life. And it’s all gone.

The worst part? It was all self-inflicted, which–as many of us know–is the most brutal kind of pain to experience. This really is a shame, because very few people would say Williams is unlikable or polarizing like so many others in broadcasting. So why did he tell such tall tales on multiple occasions when he already had it all? Theories are abundant on cable news today, so here’s one more: Ultimately, he wanted to be more compelling, more entertaining, more worldly in interviews while simultaneously portraying himself as an old school reporter by bravely going into war and natural disaster zones to get the story…even if those stories were fiction. Short version: Williams was determined to be the real life version of The Most Interesting Man in the World, and his love for celebrity eclipsed his responsibility as a journalist.

So is the six-month suspension handed down by NBC and Comcast truly what it appears to be? Will Williams be sitting in his old anchor chair on July 10, 2015? A few things have to happen, starting with no other fabrications or gross exaggerations coming to light (and rest assured, almost anybody and everybody with a byline is looking for the next one as you read this). More importantly, the fact-finding mission that is happening internally at NBC must prove two things: (1) Williams did in fact contract dysentery while covering Katrina in 2005, which could be easily verified via medical records since he couldn’t have simply recovered on his own. Note: Dysentery not the kind of condition where you take two aspirin, eat some soup and hope it all works out. (2) Whoever the police officer was who allegedly saved Williams from roving gangs (his description, which has been disputed by hotel management) in the Ritz-Carlton he was staying in at the time of Katrina needs to confirm such an event occurred. If somehow these two things check out, Williams has a chance of actually returning. If they don’t…there always the possibility of an opening at the Daily Show as a Plan B.

So can Williams return quietly in July if actually given the chance? Of course not. The social media mob won’t allow it, nor should they. He will still need to do a major mea culpa, as in a sit down with Oprah. Or Ellen. Or Barbara Walters — who is in working retirement– and try to be a much more human and contrite than his read-from-the-prompter apology issues on the Nightly News last week. Game plan? Beg for forgiveness.

Americans love comebacks– and if the sympathy is there– he’ll be given a second chance. Of course, all of this depends on nothing else coming out, and the dysentery claim being confirmed, and that police officer verifying Williams’ account of what was happening in that hotel…a recollection almost nobody else who was there at the time is sharing.

Suspension? Feels more like an obituary for an-otherwise shining and successful 22-year career at NBC News.

Just an amazing turn of events for a guy who enjoyed as good a life as anyone on this planet only ten days ago.