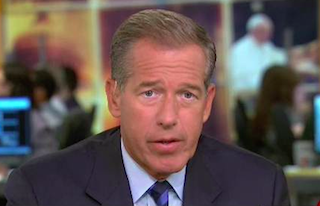 Brian Williams made his long-awaited, highly-anticipated return to the airwaves on Tuesday, anchoring MSNBC’s “breaking news” coverage of Pope Francis I’s arrival in the United States. But while the combination of Williams and the Pope helped boost the network’s daytime ratings over what it has seen in recent weeks, it was no match for similar coverage by Fox News and CNN.

Between the hours of 3 and 5 p.m. ET, the Williams-anchored special coverage averaged 526K total viewers. That put in third place between Fox News, which had 1.17 million total viewers and CNN, which had 920K. In the 25-54 demo, CNN managed to nab the top spot with 216K, followed by Fox with 203K and then MSNBC with 76K viewers.

The bad news for Brian Williams is that half a million total viewers is about 5% of the nearly 10 million viewers he once drew as anchor of NBC Nightly News. Even with breaking news bigger than the Pope, Williams will almost certainly never come close to the audience he became accustomed to on NBC.

Watch Williams first few minutes on the air below, via MSNBC: