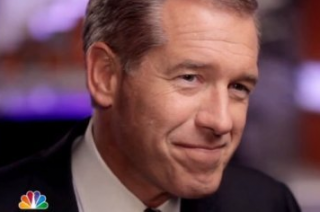 Brian Williams gets a second chance at NBC. Sort of.

Either way, good for him.

The narrative around Williams somehow being a more polished version of Chris Matthews, being some kind of die-hard liberal with a surreptitious agenda never quite flew with me. In regards to becoming the media story of the year for all the wrong reasons, you just always got the sense Williams looked at those who sat in the big-boy chair before him–those like Dan Rather who was in harm’s way in Vietnam, or those with major gravitas of a Brokaw or Jennings, or someone with the serious reporting chops of a Scott Pelley–and felt he had to prove himself to be on their level via hyperbole, exaggeration or downright lying.

But Americans love comebacks, embrace second chances. Williams, 55, loses his anchor chair but stays with the network. That seems agreeable enough. And the feeling in the industry mostly is, “The man has suffered enough. He’s losing Nightly News. His reputation will never be the same. But he’s a nice guy, so give him another job not so dependent on complete and total Cronkiteian trust and let him finish out his career,”… or something along those lines. But what is striking is the apathy around this story six months later: There’s no groundswell against Williams, obviously not one pro-Brian. Americans seem well past this story, and apathy rules the day.

All of that said, it’s almost stunning the route NBC has decided to go on in re-introducing Williams to the world by making Today’s Matt Lauer his first and most important interview first. Matt Wilstein is exactly right in his original reporting on this for Mediaite. Per his story this morning:

Many media watchers thought NBC might bring in an impartial interviewer, like, say, Oprah Winfrey, to handle Williams’ mea culpa, and avoid the inevitable conflict of interest accusations that will come with having an in-house personality like Lauer conduct the sit-down.

Hard to argue. By going to Lauer, it’s impossible for this to not look like a fixed fight. Matt will ask some hard questions, no doubt. But Williams would have been best served going to an independent interviewer. Of course, going to another network is obviously not an option since NBC would be insane to give away that ratings bonanza to a direct news competitor. But perhaps an Ellen or Oprah would have worked because the goal here (if you’re NBC) is to try to humanize Williams more than anything else. Yes, he’ll say he’s sorry. He’ll say he erred in judgment. He’ll say he has serious regrets and just wants a chance to prove himself again.

Lance Armstrong said all of those things as well, who was only the textbook definitions of rehearsed and disingenuous during his mea culpa with Oprah a few years ago. The takeaway from any first interview with Williams needs to be that he knows what he did was wrong, why it won’t happen again, and that he’s ready to get back to doing what he loves. If that happens, all is forgiven, and it likely will since Williams is about as smooth as anyone you’ll see on camera (See: The opposite of Armstrong).

Brian Williams gets a second chance. It’s hard not to root for the guy on some level…

But accusations of a conflict of interest is the last thing Williams and if NBC needs right now.

Both the network and the employee need to handle this delicate situation perfectly.