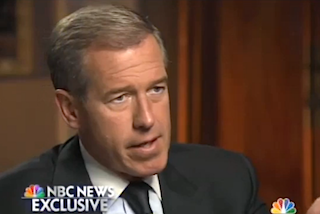 How did Brian Williams become the first American journalist to score an exclusive, in-person interview with former NSA contractor Edward Snowden? Ahead of tonight’s NBC News special presentation, Williams spoke to The New York Times’ Bill Carter about the various challenges that went in to setting up the meeting in Moscow and shared his personal impressions of the “enigmatic” man.

“We were worried about a number of things,” Williams told Carter, mentioning concerns about how much the Russians would be monitoring their every move while his team was there. “A former administration official told us: ‘Don’t kid yourself, they know who you are, who you are coming to see, and everything you will do while you are there.’”

Williams flew from New York to London to Moscow, with his bags getting lost in transit. If they had not arrived just hours before Snowden did, he joked, “We would have been out looking for a suit at Saks-ski’s.”

“This is an enigmatic guy,” Williams said of Snowden. “We’ve only seen him in video from Skype appearances and the video he did from a hotel in Hong Kong.” He added, “He is blindingly smart. Pay no attention to the fact that he only has a G.E.D. from high school. I joked about how, here we were, two guys with high school degrees, both dropouts from the otherwise great American community college system.”

While Williams was happy to share his opinions of Snowden the man, he was reluctant to say how he felt about what Snowden did. “I am an American citizen with my own complicated thoughts on this subject,” he said. “My thoughts simply are not germane. I put those aside and tried to ask questions a diverse audience would be interested in.”

The anchor did share more of his opinions on leaks in general when he sat down with Jon Stewart on The Daily Show last year, just days before the Snowden story broke. “Leaks are how we have learned about a lot of stories, especially in the last 10 years — this so-called war on terrorism,” he said at the time. “I think we will find our way. The attorney general is in a rough spot over this and to a lesser extent, the president.”

Before the full interview with Snowden airs on NBC tonight at 10 p.m. ET, the network aired the first excerpt from it on last night’s NBC Nightly News. Watch video below, via NBC: