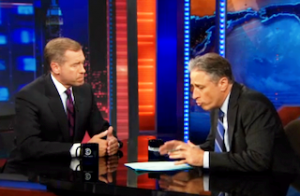 “Do you think they’re reading your emails?” Stewart asked, referring to the Justice Department. “Because I have emailed you and said truly filthy things.”

Leaks “are a big part” of our democracy, Williams contended. “Leaks are how we have learned about a lot of stories, especially in the last 10 years — this so-called war on terrorism. I think we will find our way. The attorney general is in a rough spot over this and to a lesser extent, the president.”

For Republicans “who have desperately thrown their proof at the wall,” Stewart noted these scandals are “worthy of scrutiny.” It partly comes with the territory of second terms, Williams added, pointing to Bill Clinton as an example. All leaks aren’t created equal, but the DOJ “criminalizing journalism” is “enormous,” Stewart pressed.

He then questioned Williams about the off-the-record meeting Attorney General Eric Holder had with journalists. “I’ll only say this,” Williams replied. “It’s been unusual to be, in a way, on both sides of the war on terrorism. I have seen the end effect of a drone. I have watched it carried out on a live television screen … It is a rare thing to witness, and that’s the other end of this.”

While not using a word as strong as “draconian,” Williams agreed that when the administration uses national security as a defense, they pursue leaks with strong authority.