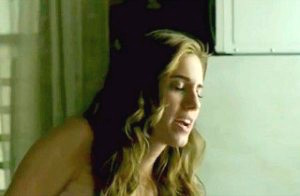 While we all watched the Golden Globes on Sunday evening, Gawker noted that HBO’s Girls began its fourth season with Allison Williams‘ character Marnie on the receiving end of some ol’-fashioned “booty eating” from her new beau.***

In advance of the episode, Vulture had a reaction from Allison’s father, NBC newsman Brian Williams, who gave pretty much the same answer he does every time his daughter is involved in a sex scene:

She’s always been an actress. For us, watching her is the family occupation and everybody has to remember it’s acting, no animals were harmed during the filming, and ideally nobody gets hurt.

For her part, Williams told EW about the scene’s creation, in which no butts were actually eaten:

I had a couple of days talking to wardrobe and makeup to get ready to rig the thing that I wore for the ass motorboating. It was an engineering achievement! I would manufacture it if more than one person a year needed it. [Laughs] It was so elaborate—it involved Spanx that we cut away and glued down and involved menstrual pads and two of those weird thongs. I’ve had to do scenes like this twice now.

The moment below, in GIF form here.

And head on over to Gawker if you want to view the actual scene.

***Prediction: This article’s comments section will be full of the predictable “this is disgusting” outcry, but take note, fainting-couch frequenters: The activity known as “booty-eating” is currently experiencing a cultural renaissance.

UPDATE — Feb. 5, 2015, 11:00 a.m. ET: Betcha Brian Williams wishes he could go back to the days when his daughter’s anilingus scene was the most pressing item he has to comment on.