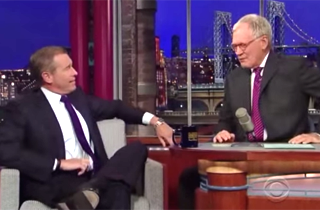 Thanks to the scrutiny surrounding Brian Williams‘ truth-stretching about a helicopter incident in Iraq, the rest of his war tales are being investigated, including his time with the famed SEAL Team 6. According to the Huffington Post, Williams not only repeatedly claimed that he hung out with the elite military squad that killed Osama bin Laden, but that he flew on their helicopters multiple time, and that he was their best friends too.

Starting in 2011, shortly after the group killed the 9/11 mastermind during a secret mission into Pakistan, Williams began openly talking about his experiences with the team during his 2003 coverage of the Iraq War. While the Post notes that it’s possible that Williams was prevented from talking about his exploits with SEAL team 6 due to confidentiality agreements, they also note that he began yammering about these stories shortly after bin Laden’s death:

“We have some idea which of our special operations teams carried this out,” Williams said on “The Late Show With David Letterman” the day after the raid. “It happens to be a team I flew into Baghdad with, on the condition that I would never speak of what I saw on the aircraft, what aircraft we were on, what we were carrying, or who we were after.”

“Now, people might be hearing about SEAL Team 6,” Williams said the next night, May 3, 2011, on “Nightly News.” “I happen to have the great honor of flying into Baghdad with them at the start of the war.”

And again on Letterman in 2012, in which he talked about receiving gifts from his awesome friends:

“I flew into Baghdad, invasion plus three days, on a blackout mission at night with elements of SEAL Team 6, and I was told not to make any eye contact with them or initiate any conversation,” Williams said on “Letterman” in May 2012. (Three days after the U.S. invasion would have been March 22, 2003, not April 9, 2003, which was the day Williams broadcasted from the Baghdad airport.)

…In the 2012 “Letterman” appearance, Williams also recalled carrying a box of Wheat Thins, which he said a hungry special operator dug into with a “hand the size of a canned ham.” They got to talking, and Williams told the commando how much he admired his knife.

“Darned if that knife didn’t show up at my office a couple weeks later,” Williams told Letterman.

And again in 2013, on Letterman (there’s a trend), he claimed he received the greatest gift of all:

“About six weeks after the Bin Laden raid, I got a white envelope and in it was a thank-you note, unsigned,” Williams said on “Letterman” in January 2013. “And in it was a piece of the fuselage of the blown-up Black Hawk in that courtyard. Sent to me by one of my friends.”

It’s worth pointing out here that SEAL Team S6 was forced to abandon one of their helicopters during the raid as it could not take off from the compound, leading to an international incident involving China scrapping the helicopter for military secrets. And a former SEAL said that the entire thing sounded impossible, by the way:

“My initial reaction is it sounds completely preposterous. There’s a healthy dislike towards embedded journalists within the SEAL community,” said Brandon Webb, a writer and former SEAL sniper who helped train Chris Kyle. “I can’t even remember an embed with a SEAL unit. And especially at SEAL Team Six? Those guys don’t take journalists with them on missions.”