Brian Williams Varied in His Own Story About Hezbollah Rocket Fire 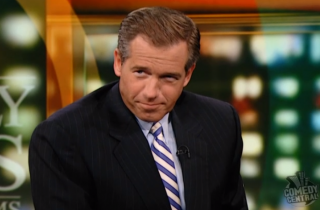 The hits just keep on coming for NBC’s Brian Williams.

Less than a week after scandal broke surrounding the Nightly News anchor’s repeated “misremembering” of his own experiences covering the Iraq War, other self-contradictions and fibs have emerged.

The latest comes via the Washington Post, who unearthed Williams giving varying stories about the risks he faced while reporting on the 2006 Lebanon War between Israeli forces and Hezbollah militants.

In a July 2006 NBC blog post, Williams flying “at 1,500 feet” in a Blackhawk chopper with an Israeli Defense Forces official when they saw Hezbollah launching a rocket roughly six miles away. The pilot had informed him that the previous launch had landed 30 seconds prior.

One month later, Williams appeared on The Daily Show and told a slightly different story to Jon Stewart: “A view of rockets I have never seen, passing underneath us, 1,500 feet beneath us,” he said. “And we’ve got the gunner doors [open] on this thing, and I’m saying to the general, some four-star: ‘It wouldn’t take much for them to adjust the aim and try to do a ring toss right through our open doors, would it?’”

Emphasizing his own self-styled penchant for near-death situations, Williams joked, “Anytime you want to cross over to the other side, baby, travel with me.” Watch the Stewart interview below:

A year later, he repeated that newer, more dangerous version to a Fairfield University student, Williams claimed his helicopter came close to Hezbollah rocket fire as he flew over northern Israel. “There were Katyusha rockets passing just beneath the helicopter I was riding in,” he recalled. Watch that below: