Bringing A Knife To A Gunfight: How Texas Stabbings Will Impact Gun Control Debate In Politics And Media
video

Bringing A Knife To A Gunfight: How Texas Stabbings Will Impact Gun Control Debate In Politics And Media 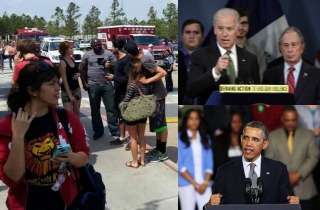 14 are injured with two victims in critical condition on Tuesday after an unidentified assailant went on a rampage on the Lone Star Community College campus in Cypress, Texas. With the gun control debate reaching a climax this week, as the Senate prepares to address calls by some to implement stricter gun laws in the wake of the Newtown massacre, this incident is certain to become a feature of the debate about gun violence. Like it or not, politicians and members of the media opposed to gun control will reference this event to further the narrative that new gun laws do nothing to address the root causes of violence, and merely satisfy the emotional impulse to “do something” in the wake of a tragedy.

RELATED: Harry Reid Invokes His Father’s Suicide While Speaking About Gun Control On The Senate Floor

President Barack Obama took the rhetoric surrounding his desire to see new gun laws passed after the massacre at Sandy Hook Elementary to new heights on Monday when he held a campaign-style event, flanked by the parents of children killed in that attack on December 14, 2012, and demanded that Congress act.

For opponents of new gun control measures, this sounds to them like the exploitation of a tragedy with the aim of advancing a political agenda. For them, there is no pattern of behavior more tasteless. Lamentable as it may be, the knife attack in Texas will be referenced by gun control opponents to illustrate their case in the same way. Gun control proponents are likely to find that course of action to be just as vulgar.

While, as of this writing, no victim in the Lone Star attack has lost their life, the event highlights how dangerous knife attacks are and how many more American deaths are attributable each year to knives than to assault rifles.

In 2011, according to the FBI, 1,694 people died as a result of knife wounds. 323 people died as a result of being shot by rifles of any kind. Handgun-related deaths far outpaces any other weapon in terms of body count (6,220 deaths in 2011 alone related to handguns). Gun control opponents are on shakier ground when they oppose expanding background check laws, which evidence suggests can reduce illegal handgun ownership. The new impediments will also, necessarily, increase the barriers to handgun ownership for law-abiding citizens. The “secondary market,” in which an estimated 40 percent of gun sales occur, would continue to exist even after the gun show loophole is closed and “straw purchasers” are curtailed.

If an individual at Lone Star Community College had a concealed handgun on them at the time of this incident, gun control opponents will add, the number of individuals seriously injured by the knife-wielding man may have been dramatically reduced.

“Um, gun nuts, the stabbing spree proves our point, not yours,” tweeted Democratic strategist Greg Pinelo in anticipation of the inevitable use of this incident to advance an anti-gun control agenda. “Everybody’s alive.” For now, Pinelo is correct. But those who invoke the Texas incident to poke holes in the premise behind new gun laws will not only focus on the injurious implement used.

According to a report on Fox News Channel via Trace Gallagher, classmates described the unidentified assailant in Texas as being possibly mentally unstable:

A female classmate said that she had previously seen the suspect carrying a teddy bear around the school and suggested that he was hearing impaired. If these reports are confirmed, they will provide critics of new gun laws with ammunition to reinforce their long-standing argument that addressing the problem of mentally unsound individuals in society is critical to preventing future mass shootings or stabbings.

The parameters of the debate on new gun laws will be altered by the tragic events currently unfolding in Texas. What is unlikely, however, is that proponents of new gun control laws will see themselves reflected in the distasteful appropriating of a tragedy by Second Amendment rights advocates.

As one nearly forgotten Republican candidate once said, “What’s sauce for the goose is sauce for the gander.” Gun control proponents are about to be on the target of a heavy dose of sanctimony. Chances are that they will find the receiving end of an emotional browbeating as irritating as gun rights advocates have found it for the last several months.