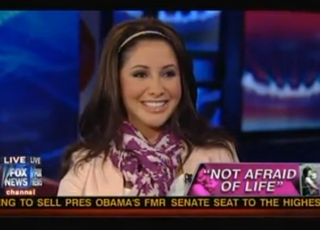 The release of 20-year-old Bristol Palin‘s new memoir, Not Afraid of Life, has gotten tongues wagging about everything from how exactly she conceived her child to just how much she got along with the McCain family during the 2008 campaign. During an interview with Sean Hannity tonight, the new author chatted about why she wrote a book and the experiences that have shaped her since becoming a household name.

“You have a pretty gutsy family,”Hannity told he as he began his interview, confessing that, while he was “really dumb” as a teenager, he would never reveal the mistakes he made in his youth in the book the way the younger Palin has. Palin explained that she saw her book as a form of service: “I know that putting it all out there… that will eventually help somebody.” She noted that she made many mistakes and “owns up” to them, clarifying once again that, while admitting she remembered little about her son’s conception, “I’m not accusing Levi [Johnston] of rape or anything like that,” but just analyzing her behavior “through older and wiser eyes.”

Hannity also asked her about her relationship to Meghan McCain during 2008, and Palin was very quick to distance herself. “We come from two completely different worlds,” she said of Sen. John McCain‘s daughter, noting that, unlike McCain, “I do things for myself. I’ve had a job since I was really little.” She also mentioned the fact that her hobbies were far different from McCain’s: “I don’t know if she goes out hunting and fishing and stuff like that.”

While the odds of Palin having to interact with McCain anytime soon are slim, the political world may be at her doorstep still, as she said she wold “absolutely” campaign for her mother should she decide to run, a decision that has yet to be made publicly. “What happens at our kitchen table stays at our kitchen table.”