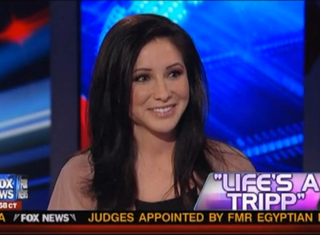 Bristol Palin has a lot on her plate these days, as she told Sean Hannity tonight. Her new program, Life’s A Tripp, is slated to begin, and she has a lot to say about her mother’s future political career, the future of her son, and even whether she may have political ambitions of her own.

“No matter what I’m doing, people are still going to be talking about me,” the younger Palin told Hannity tonight, explaining the motivation behind doing another television series. She admitted that it was true that Levi Johnston, her son’s father, had not seen Tripp in over a year, but she was confident that Tripp will end up being “a well-rounded kid” with many role models, though “it is sad that Tripp doesn’t have an actual father figure.”

As for running for office, Palin said she wasn’t planning on it “anytime soon,” but “I don’t think I’d shut it completely– I’m only 21.” She also didn’t say whether her mother, Sarah Palin, had any new campaigns up her sleeve. “I know that we all have tough skin, we are all strong, and our roots are very grounded,” Palin explained, expecting that “whatever she does, we are going to support her.”

Palin also warned detractors to stop talking about the Palins– “seeing some of the comments… gives me motivation to speak out more, so they’re doing themselves wrong by talking about us.”