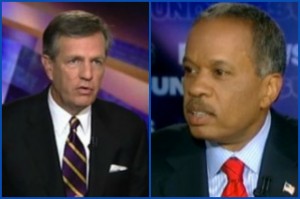 Brit Hume and Juan Williams argued ferociously on Fox News Sunday over the propriety of Eric Holder investigating the Justice Department over transgressions that occured under his own watch.

Williams pointed out that Holder is simply executing the leak investigations Republicans have been demanding, and that began in earnest under the Bush Administration. But Williams tried to distance Holder from the Department of Justice’s more egregious actions, especially the investigation into Fox News chief Washington correspondent James Rosen.

“Eric Holder did not conduct the probe that led people to somehow come to the madhouse conclusion that James Rosen was somehow a coconspirator,” Williams said.

Hume was incredulous at this statement. “Was that not in the FBI affidavit?”

“He signed the affidavit as Attorney General of the United States,” Williams said. “He did not conduct the probe.”

“You’re saying he’s not ultimately responsible as the head man of the Justice Department, who personally signed off on this? If he signed off on it, how can he investigate it?”

Williams argued that Holder is the exact candidate, as Attorney General, to now spot prosecutorial overreach in his own ranks.

“Wasn’t he supposed to see all that before he signed off on the affidavit?” Hume asked.

“He can’t see everything,” Williams said. “What he did was to say these are good people and he trusts his people—”

“You don’t know whether he said anything like that or not,” Hume said, with some exasperation. “What you do know, and what we all know, is that when this affidavit came to him rife with assertions that this reporter doing his job was acting in a criminal way, he OKed it.”