Brit Hume: Gay Marriage ‘A Net Minus’ For Obama, ‘Just Another Politician Doing What Politicians Do’
video

Brit Hume: Gay Marriage ‘A Net Minus’ For Obama, ‘Just Another Politician Doing What Politicians Do’ 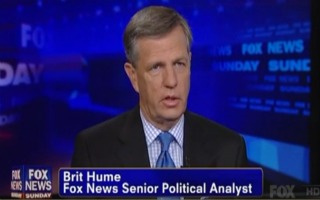 Brit Hume attacked the conventional wisdom on President Obama’s gay marriage announcement this week on Fox News Sunday. Hume said that the nakedly political rollout of Obama’s position on gay marriage was an attempt to merely excite the base and curry favor with a segment of the Democratic electorate, but by avoiding policy proscriptions that advance what has come to be seen as a civil rights issue, he looks to be avoiding the tough decisions. “Far from being a kind of post-partisan leader and all the rest of it, that he turns out to be just another politician doing what politicians do,” said Hume. “And I think that’s harmful to him.”

Responding to an assertion by Christian Science Monitor reporter Liz Marlantes that public opinion has been moving in favor of gay marriage rapidly since 2004, and that politicians of any political stripe do not want to get ahead of public opinion on the issue, Hume said “I just think that there is a reason to distrust the national polling that is being done on this.”

You look at it and it looks like a majority of the public now supports gay marriage, but you look what’s happening state-by-state and you’re getting an entirely different picture. I think what people say to pollsters may differ – you know, this issue has emerged as a kind of civil rights issue. This is a country in which you do not want to be seen as kind of standing athwart the advance of civil rights. So you may tell a pollster one thing, but that doesn’t mean that’s how you’re going to vote. I don’t think that means this apparent support for this means that’s how people are going to vote.

I think it’s a net minus for the president. And not just for that reason, also because this looks so nakedly political. The President’s position hasn’t evolved, it’s revolved. In 1996, he came out and said he was in favor of gay marriage. Then in 2004 running for office he said ‘no,’ he was against it and he stayed that way until just now. We also know, as Paul [Gigot] was describing, that they planned to roll this out at a particular time – obviously for maximum political advantage. So we are led to believe that this is a position that he’s held for some time, but withheld at the same time.

And what did he say actually? Did he say, I’m for this and I want to make it possible everywhere and get behind legislation to do that or an effort to advance a Constitutional amendment to do that? No. He said he’s going to leave that up to the states. So, he’s really not going to do anything to advance a position from which he hopes to get some political gain. Very obviously political – all of it. And I think that, as people look at that, it may further the impression that the that the President suffers from. That far from being a kind of post-partisan leader and all the rest of it, that he turns out to be just another politician doing what politicians do. And I think that’s harmful to him.