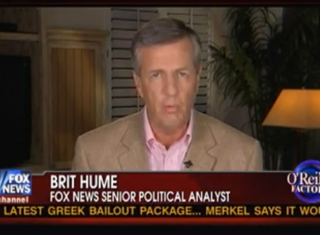 Brit Hume is surprised at the extent to which Rick Santorum has decided to embrace a social conservative platform, eschewing economics and foreign policy for taking a strong stance against contraception and pre-natal care. On tonight’s O’Reilly Factor, he told Bill O’Reilly he was surprised to the extent that Santorum spoke about his faith, and did not expect it to play very well with most Republican voters.

Hume noted that his recent comments on contraception were something of a shock, and politically inexpedient. “To many Americans… that seems peculiar,” he noted, adding that many Americans did not see how pre-natal care was something to fight against. He borrowed the term “political malpractice” from Michael Barone to explain the damage he was doing to his campaign with “unnecessary controversies which I think will alienate a lot of people.”

O’Reilly disagreed, saying that he “admired” Santorum for “being true to himself.” However, he ceded that “no pres in history has ever been elected on that kind of a platform,” later adding that a potential strategy Santorum is using is simply to “appeal to those voters who are very actively involved in the primaries” without taking too much of a look at the general just yet. Hume saw how this could be a viable strategy for some states, “but as we get into the states where Evangelical voters are less important,” he saw it as a problem. “Santorum wouldn’t even be competing in Michigan” without the Evangelical vote, concluded O’Reilly.