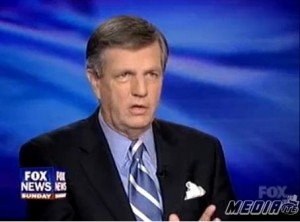 On Fox News Sunday this morning, anchor Brit Hume dispensed some advice to embattled golfer Tiger Woods that’s sure to touch off a firestorm of controversy, suggesting that Woods would be better off forsaking Buddhism for the more “redemptive” and “forgiving” Christianity. Was Hume out of line, or was he just being a good friend to Tiger?

Jayne from Firefly agrees with him!

Here’s the clip, which is already the hottest thing on Twitter:

Tiger Woods will recover as a golfer. Whether he can recover as a person, I think is a very open question, and it’s a tragic situation with him. He’s lost his family, it’s not clear to me whether he’ll be able to have a relationship with his children, but the Tiger Woods that emerges once the news value dies out of this scandal, the extgent to which he can recover, it seems to me, depends on his faith. He’s said to be a Buddhist, I don’t think that faith offers the kind of forgiveness and redemption that is offered by the Christian faith, so my message to Tiger would be “Tiger, turn to the Christian faith, and you can make a total recovery and be a great example to the world.

Good for Hume, I say. I’ve been wanting to tell Tiger to try agnosticism, but I just wasn’t sure.

I was going to suggest nihilism, but I didn’t really believe it.

On its face, Hume’s remarks do seem to suggest that Christianity is superior to Buddhism, and the idea that someone should abandon their own faith for yours does reek of arrogance. Those who are offended by Hume’s remarks aren’t out in left field somewhere. As I asked Adam Baldwin, whose Twitter feed first alerted me to the clip, “Would you applaud if someone advised John Ensign or Mark Sanford to ditch Christianity?”

I don’t know Baldwin well enough to know how he would respond, but I’d lay good money that even casual Christia

ns would be offended by such a proposition. It’s one thing to extoll the virtues of your own faith, but quite another to denigrate someone else’s.

If you look at the context of Hume’s remarks, it seems that he views religion as a menu comparison. Sure, Buddhism’s great for achieving inner peace, but Christianity’s got that redemption thing to fall back on. Hume’s advice doesn’t hinge on the relative truth of either religion, but rather the services it can offer a horndog golfer.

What I find comical about Hume’s entreaty is the notion that Buddhism is the problem, and not Tiger’s flawed humanity. If Tiger had been practicing Buddhism, he wouldn’t have wanted all that sex in the first place.