British Parliament Grills Guardian Editor Over Snowden Leaks: ‘Do You Love This Country?’ 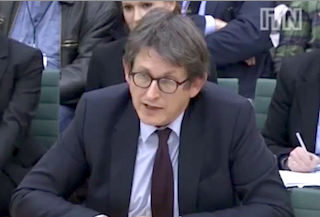 MP Keith Vaz grilled Rusbridger on the specifics of how The Guardian obtained the material and what parts of it they decided to withhold from the public before turning to the bigger question of the editor’s patriotism. “I love this country,” he said. “Do you love this country?”

“We live in a democracy and most of the people working on this story are British people who have families in this country, who love this country,” Rusbridger responded, before expressing his “surprise” that he would be asked such a question as part of the hearing. “I’m slightly surprised to be asked the question but, yes, we are patriots and one of the things we are patriotic about is the nature of democracy, the nature of a free press and the fact that one can, in this country, discuss and report these things.”

Rusbridger also noted that The New York Times and Washington Post made “virtually identical” decisions when it came to the NSA coverage. He told the committee that he and his team spoke to 30 editors who were familiar with handling secret material and they all said they would have done the exact same thing The Guardian did.

Watch video below, via ITN: