Broadcasting & Cable: Could A Later Time Slot Be In Megyn Kelly’s Future? 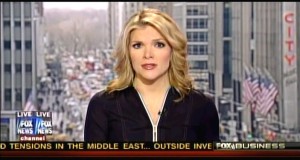 Broadcasting & Cable‘s Ben Grossman brings up an interesting question in his (overwhelmingly positive) profile of Fox News personality Megyn Kelly: Could a later time slot on Fox News be in her near future?

As you likely know, Kelly currently hosts America Live, running through – and often holding spirited debates about – the day’s top headlines. It’s a daunting task, having to fill two hours of every afternoon with news that runs the gamut from what sort of smells might emanate from several thousand dead anchovies to arguing about whether Supreme Court Justice Clarence Thomas should recuse himself from hearing a case due to his wife’s financial stake in the matter. But it’s one that Kelly manages to pull off with aplomb, thanks in no small part to her legal background and her ability to convey professionalism and empathy without sacrificing one for the other. Kelly is also tough – if there’s one thing she won’t stand for, it’s allowing her guests to run away with the show by simply presenting prepared talking points. Oh, and she’s not exactly painful to look at.

With all this working in Kelly’s favor, it would be a miss on Fox’s part to resist building Kelly up as a bigger brand, which it could easily accomplish by giving Kelly her own nightly show. As Grossman notes, “[w]hile she hasn’t reached the single-name status of fellow FNC stars O’Reilly, Beck or Hannity, she has garnered plenty of attention.” Of course, Bill O’Reilly, Glenn Beck and Sean Hannity have shows built around their personalities – programs which act, essentially, as platforms through which to extend their respective brands. Kelly, on the other hand, has a show built around the news, not necessarily her personality or brand. Sure, she shares her legal opinions on the rather preciously-named “Kelly’s Court” segment of her show, but a mid-afternoon timeslot is devoted to infotaining, as it were, audiences about breaking news and developing stories. And Kelly is capable of so much more.