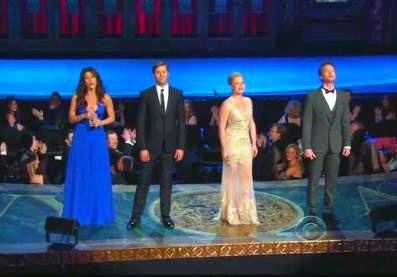 One of the funnier moments from Sunday night’s 2013 Tony Awards on CBS, aside from host Neil Patrick Harris‘ excellent opening number, came in the form of a song about Broadway stars trying–and failing–to make it on television. And it just so happened that each of those stars had their failures on NBC.

One by one, Harris welcomed some of Broadway’s biggest names, who made less-successful transitions to TV. There was Andrew Rannells, who originated one of the two leads in The Book of Mormon, but failed to carry The New Normal. Next was Megan Hilty, who led the cast of NBC’s biggest Broadway-themed experiment Smash, which was canceled after a second season that most people were surprised it got in the first place. Finally there was Laura Benanti , who won a Tony for her 2008 role in Gypsy but managed to appear in two consecutive NBC flops, The Playboy Club and Go On.

Each actor sang about their troubled forays into television, from Rannells’ “I Like To Star In A TV Show,” set to West Side Story‘s “America” to Benanti’s boozy version of “Television Sucks” set to Company‘s “Ladies Who Lunch.”

Meanwhile, Harris, who began as child TV star with Doogie Howser, M.D., managed to earn adult credibility on Broadway and then returned to TV with the long-running CBS series How I Met Your Mother tried his best to make them all feel better. To end the bit, Harris led them all in a rousing rendition of “What I Did For Love.”