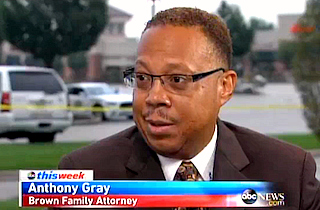 Brown family attorney Anthony Gray told ABC News’ Martha Raddatz Sunday morning that the Brown family was “appalled” they were not given a chance to see the footage or attempt an identification of Brown before surveillance footage allegedly showing Brown robbing a convenience store was released to the public.

“They were very appalled by it,” Gray said. “They saw it for the first time, at least a glimpse of it, on nationwide TV. They had requested an opportunity thorugh the attorneys ot see any video footage before it was released. That request obviously was not honored. So quite naturally the family was very disturbed by it.”

The video has been the subject of speculation and controversy, both over the details of its release — the Department of Justice reportedly tried to stop it — and whether it affected the shooting of Brown, as the officer involved in the shooting reportedly did not know he was a suspect.

“I will point out that nobody from the family was even given the opportunity to even authenticate that that was actually Mike Brown Jr. in that video,” Gray added. “They haven’t really examined it for that purpose. They have no reason not to believe that it’s him. But much like you identify somebody who’s deceased, you have a family member come in and make a positive ID. They have not had an opportunity to do that.”

Watch the video below, via ABC News: