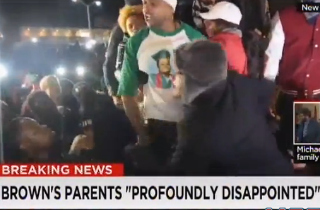 Michael Brown’s stepfather Louis Head apologized in a statement to CNN’s Don Lemon for his reaction to the Grand Jury decision that has led to an investigation over whether he incited a riot. Lemon had been trying to procure an interview with Head, but received instead the apology via a source close to him.

The statement is transcribed below:

“Something came over me as I watched and listened to my wife, the mother of Michael Brown Jr., react to the gut-wrenching news that the cop who killed her son wouldn’t be charged with a crime, my emotions admittedly got the best of me.

“This is my family. I was so angry and full of raw emotions, as so many others were, and granted I screamed out words I shouldn’t have screamed in the heat of the moment. I was wrong and I humbly apologize to all those who read my anger and my pain as a true desire for what I want for the community.

“To place blame solely on me for the conditions of our community and country after the Grand Jury decision goes way too far and is wrong as the decision itself. To declare a state of emergency and send a message of war, not peace, before a Grand Jury decision is announced is also wrong.

“In the end I’ve lived in this community for a long time. The last thing I truly wanted was to see it go up in flames. In spite of my frustration, it really hurt me to see that. It’s time to rebuild. If we are to honor Michael Brown’s memory we need to work together to make rebuilding happen. I plan to remain here and do my part in earnest truth.”