Brzezinski Battles Cruz over ‘Destructive’ Iran Letter: Leading Us Down ‘Road to War’ 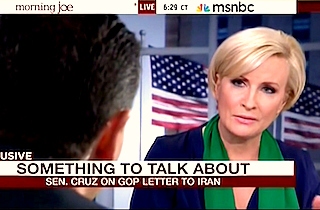 Morning Joe cohost Mika Brzezisnki took on breakfastmate Joe Scarborough and Senator Ted Cruz (R-TX), the latter on his first appearance on the Beltway show, over the Senate GOP’s letter to Iran, which has drawn criticisms of the Senate intruding on the executive’s power of foreign policy and even treason.

Brzezinski has been lambasting the letter since it was written, arguing that it was sent purely to undermine President Barack Obama at the risk of triggering military operations against Iran. Scarbrough has intermittently defended the letter as not without precedent, but yesterday said it was contributing to Washington’s toxicity.

Brzezinski asked Cruz what he thought of the letter being used by Iranian hardliners to try to squelch the deal. “The fact that the twice now it’s come up and caused problems in the negotiations and hard liners are using it, that was the intention?” she asked. “You wanted that to happen?”

“The idea that hard liners are using it is utter silliness,” Cruz responded. “If we actually had negotiators that were trying to defend our national security, if anything the letter would help them, because what the letter makes clear is for any deal to be binding, it has to go through Congress.”

“I’m still talk about the fact that you are saying to me that what’s happening now in terms of the hardliners using the letter to stall on these negotiations was actually a part of your intention,” Brzezinski said. “It just seems extremely destructive. …I think it’s not inappropriate for Congress to have a say and to have a voice. But to interfere with a negotiation with Iran, and to actually possibly even undermine a deal in the making — basically the next step to that is to just get right down the road to war.”

“The choice is not between war and a bad deal,” Scarborough objected.

“Do you know exactly what the deal is to call it a bad deal?” Brzezinski asked. “Do you have all the information?”

“We don’t,” Crux said. “We have some that the administration has leaked. Oddly enough the administration leaks more details about the deal to the media than they actually inform Congress.” Cruz then defended the precedent for the letter by invoking Ronald Reagan’s efforts in Nicaragua, which was odd.