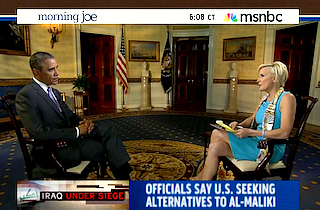 In an interview pre-taped Friday but aired on Morning Joe Monday morning, MSNBC host Mika Brzezinski pressed President Barack Obama on the deteriorating situation in Iraq, charging, “You said that the war was ended in Iraq. You said al-Qaeda was decimated. You said it was stable.”

“It was,” Obama replied. “But just because something is stable two years ago or four years ago doesn’t mean it’s stable right now.”

Obama emphasized that the U.S. needed to work with other forces in the region to contain ISIS, but that it couldn’t go playing “whack-a-mole,” occupying a country every time an Islamic militant group popped up in the Middle East. He also denied that there was some magic U.S. action that could have been taken in Syria to prevent ISIS’ rise, and also maintained that the situation did not change his calculus for troop withdrawal from Afghanistan.

“We’re prepared to have a residual force that helps to continue to train [Afghan] forces, to continue to help stabilize the situation as you have a new government coming in,” Obama said. “But keep in mind that our goal in Afghanistan was to decapitate al-Qaeda, which had carried out 9/11. That has been accomplished.”

“Unless we are prepared to stay indefinitely in all these countries, something that we can’t afford, and would involve, over time, accusations we were occupying these countries, at some stage, they are going to have to take responsibility for working together,” Obama said.