MSNBC’s Brzezinski Says ‘There Are Certain Words You Can’t Say,’ Won’t Name Them 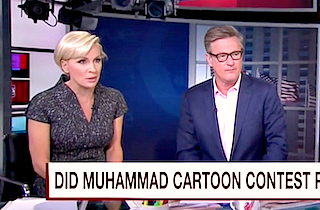 During a discussion on the blurry line between free speech and hate speech in the wake of the Garland, Texas shooting of Muhammad Art contest, Morning Joe host Mika Brzezinski said that even in America “there are certain things you can’t say,” and proved it by not saying them.

Bloomberg Politics editor John Heilemann took exception to that. “There are things you’re not supposed to say –”

“No, there are things you can’t say, Heilemann,” Brzezinski insisted.

“Yeah, there are, and I can’t say them,” Brzezinski said. “I’ll perhaps share it with you in the break. They will get you into very big trouble.”

“They will get in you in trouble,” Heilemann said. “But we had a case in Skokie, Illinois where Nazis marched through Skokie and Supreme Court said that’s protected speech, you’re allowed to do that. Can people you at you, yes; can people be upset with you, yes; can you be castigated, can you be spurned, yes. But we allow that to happen. It’s the glory of the freedom of speech, which is that people can do the most offensive things and not be thrown in jail.”

Watch the clip below and delete your account, via MSNBC: