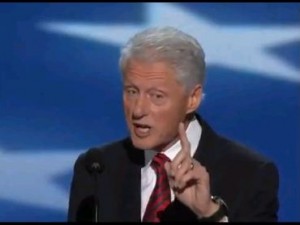 Former President Bill Clinton injected some of his gigawatt political star power into President Obama‘s reelection effort Wednesday night with a rousing speech to the Democratic National Convention, capped off by a last-minute appearance onstage by the incumbent nominee himself. With his trademark wit and charm, and his hard-won statesmanlike gravity, President Clinton made President Obama’s case for reelection persuasively and convincingly.

Despite media hand-wringing about Bubba possibly veering off the reservation, President Clinton delivered in a big way. Following a nostalgic video intro, attuned to the current president’s message, Clinton came out and told the crowd, “We are here to nominate a president. And I’ve got one in mind. I want to nominate a man whose own life has known its fair share of adversity and uncertainty. I want to nominate a man who ran for president to change the course of an already weak economy, and then just six weeks before his election, it suffered the biggest collapse since the Great Depression. A man who stopped the slide into depression and put us on the long road to recovery, knowing all the while that no matter how many jobs that he saved or created, there would still be millions more waiting. Worried about feeding our own kids, trying to keep their hopes alive.”

“I want to nominate a man who is cool on the outside,” Clinton continued, to enthusiastic applause, “but who burns for America on the inside.”

President Clinton drew a sharp, populist contrast between the parties, saying “We Democrats, we think the country works better with a strong middle class, with real opportunities for poor folks to work their way into it, where the relentless focus on the future with business and government actually working together to promote growth and broadly share prosperity. You see, we believe that ‘We’re all in this together’ is a far better philosophy than ‘You’re on your own!'”

He also drew a sly line between today’s obstructionist Republican Party, and the Republicans of yore with whom he has worked on a variety of policy and humanitarian issues. “When times are tough, and people are frustrated and angry and hurting and uncertain, the politics of constant conflict may be good. But what is good politics does not necessarily work in the real world. What works in the real world is cooperation,” Clinton said.

“One of the main reasons we ought to reelect President Obama,” President Clinton added, “is that he is still committed to constructive cooperation,” later noting that “President Obama appointed several members of his cabinet even though they supported Hillary in the primary. Heck, he even appointed Hillary.”

The line got huge laughter and applause, as did Clinton’s assessment of last week’s Republican National Convention. “In Tampa, the Republican argument against the President’s reelection was actually pretty simple, pretty snappy. It went something like this. We left him a total mess. he hasn’t cleaned it up, so fire him and put us back in.”

“They looked good, they sounded good, they convinced me that they all love their families and children, and were grateful they’ve been born in America,” he said, to laughter from the crowd. “They convinced me they were honorable people who believe what they said, and they’re going to keep every commitment they’ve made. We just have to make sure the American people know what those commitments are.”

Clinton also gave a resonant answer to those who question the slow progress of the economy. “I had this same thing happen in 1994 and early ’95,” he said, referring to his own first term in office. “We could see that the policies were working, that the economy was growing, but most people didn’t feel it yet. Thankfully, by 1996, the economy was roaring, everybody felt it, and we were halfway through the longest peace time expansion in the history of the United States.”

“President Obama started with a much weaker economy,” he continued. “No president, no president, not me, not any of my predecessors, no one could have fully repaired all the damage he found in just four years. He has laid the foundation for a new modern, successful economy of prosperity. If you renew the President’s contract, you will feel it.”

President Clinton went on to praise President Obama’s auto rescue, his energy policy, and student loan reform, before speaking at some length about health care reform. He blasted Romney and Ryan over their Medicare claims, but became especially emotional when talking about Medicaid. “They also want to block-grant Medicaid, and cut it by a third over the coming ten years,” he said, soberly. “Of course, that’s going to hurt a lot of poor kids. But that’s not all. A lot of folks don’t know it, but nearly two-thirds of Medicaid is spent on nursing home care for Medicare seniors who are also eligible for Medicaid. It’s going to end Medicare as we know it. And a lot of that money is also spent to help people with disabilities, including a lot of middle class families whose kids have Down Syndrome, or autism, or other severe conditions. If that happens, I just don’t know what those families are going to do. I know what I’m going to do. I’m going to do everything I can to see that it doesn’t happen. We can’t let it happen! We can’t!”

Clinton concluded his lengthy speech by running through a list of reasons why people should vote for the President, and told the crowd, “Every person who ever bet against America lost money. Because we always come back. We come through every fire a little stronger and a little better. And we do it because in the end we decide to champion the cause for which our founders pledged their lives and fortunes and sacred honor. The cause of forming a more perfect union. My fellow Americans… if that is what you want, if that is what you believe, you must vote and you must reelect President Barack Obama.”

Even after almost an hourm, the crowd showed no signs of fatigue, and leapt to its feet when President Obama came onstage for a man-hug with President Clinton, a photo op that was worth nearly as much as the preceding 4,000 or so words.