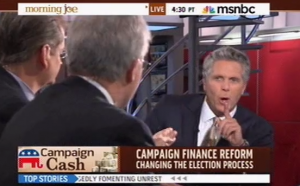 Former Republican Presidential candidate Buddy Roemer — now running as an independent — was a guest on Morning Joe Thursday, and hit on topics ranging from campaign finance reform to how to successfully fix a broken system. At one point, during a discussion about what makes a candidate appealing, he accused Donny Deutsch of trivializing the election system.

The panel was talking about what made Barack Obama so appealing in 2008, with Deutsch arguing that Obama was an appealing rock star. “Presidential campaigns are long television shows. And we love to watch,” Deutsch said. “I don’t want Mitt Romney in my home, he’s going to put me to sleep. Hillary Clinton, Barack Obama were exciting people. So the Republicans have not put forth a telegenic, exciting television candidate.”

“I think it’s just fair for us to say, for the record,” host Joe Scarborough said, “Mitt Romney doesn’t want to go to Donny Deutsch’s house either.”

“I disagree with Donny,” Roemer added. “I think it’s always a component part — How do you look? How do you act? Do you make me laugh? — that’s always a part of it. But at the end of the day, Americans vote in their families’ best interest. At the end of the day, America has demonstrated, after 200 years, the ability to pick among Abraham Lincoln and somebody else. Look, Donny, don’t trivialize it.”

“I’m not trivializing it at all,” Deutsch replied.

“I’m doing the opposite of trivializing,” Deutsch explained.

Watch a clip of the exchange below, courtesy of MSNBC: