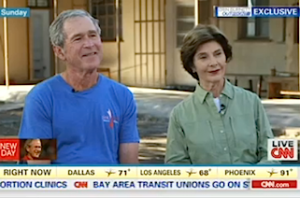 CNN’s Robyn Curnow caught up with former President George W. Bush and First Lady Laura Bush in Zambia for an interview that mostly centered on the work they are doing there at a clinic for cervical cancer. But the reporter “couldn’t help” but ask Bush about his reaction to the NSA leaks from Edward Snowden. Her first question: “Do you think he’s a traitor?”

Without directly labeling Snowden a “traitor,” Bush answered, “I know he damaged the the country,” adding “the Obama administration will deal with it.” The former president also defended the NSA surveillance programs he put in place following the attacks of September 11th, 2001. “I put the program in place to protect the country and one of the certainties is civil liberties were guaranteed,” Bush said.

Asked whether there is any “compromise” between security and privacy, Bush said, “I think there needs to be a balance, and I think as the president explained, there’s a proper balance.” Curnow noted Bush’s reluctance to criticize President Obama, something that his former vice president has not shied away from. “It doesn’t do any good” to critique Obama, Bush said. “It’s a hard job. He’s got plenty on his agenda. And it’s difficult. And a former president doesn’t need to make it harder.”

Bush also said he “could care less” about polls showing more people have a favorable view of him since he left office, saying the “only time” he “really cared” about polls was on Election Day. “Ultimately history will judge the decisions that I made and I won’t be around because it will take a while for the objective historians to show up. And so I’m pretty comfort with it. I did what I did. I know the spirit in which I did it.”