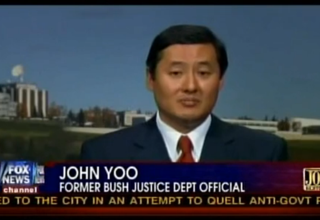 John Yoo,the Bush administration official who wrote the famed “torture memo,” has somehow squished himself into the news cycle after declaring that killing bin Laden was a mistake on CNN. After that testy exchange with Eliot Spitzer, he appeared on Fox News’ Journal Editorial Report today expressing concern over the Obama administration’s light hand on terrorists, comparing their interrogations to “what goes on in police stations.”

Yoo first made a splash this week by calling the decision to kill bin Laden a flat-out “mistake,” and with this latest appearance is beginning a pattern we’ve seen before with tragicomic obscure Bush-era officials— speaking on issues where their opinion has been, to a certain extent, devalued. Yoo expressed energetic support for enhanced interrogation techniques today to host Paul Gigot, and was glad to see the Obama administration continues Bush era policies in this regard. But while he lamented the passing of the “intelligence trove” that was bin Laden’s brain, he also noted that he didn’t think the Obama administration was up to the work required to extract the information. “I think that this administration under its own policies would have been left asking him polite questions in something like a police station,” he noted– a type of interrogation that would amount to no acquired intelligence.

Gigot challenged him on two fronts, the first being whether Yoo believed the Navy SEALs that eliminated bin Laden had made the wrong decision. Yoo shifted the burden to civilians, noting that it was President Obama who “might have sent in a difference force” with orders to capture and not kill.” And then there’s the fact that the Obama administration has not done away with enhanced interrogation techniques at all, which Gigot notes as a sign of “more continuity than change” between administrations. Yoo did not credit the administration with this, however, instead claiming that “it’s only because Obama’s administration has been pulled kicking and screaming into the real world” that the military found bin Laden.

The exchange via Fox News below: