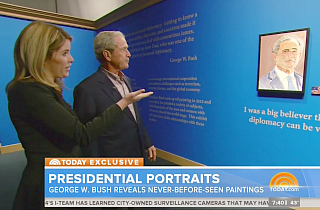 On Friday morning, former President George W. Bush joined his daughter, NBC’s Today show correspondent Jenna Bush Hager to reveal much of the artwork he has painted in his post-presidential years. Showing a number of the works off for the first time, Bush disclosed that many of his paintings were of world leaders from his time in office, including himself, and are reflective of how he felt about those various leaders.

Bush noted that his most recent self-portrait is an “improvement” upon his first which he said made him look like Alfred E. Newman.

One of the other leaders that Bush painted was former British Prime Minister Tony Blair. Bush said his work conveyed the sense that Blair was a “compassionate” and “strong” person, and “a reliable friend.”

Moving on to his painting of Russian President Vladimir Putin, Bush said that he believes the Russian president “views the U.S. as an enemy.”

“Although he wouldn’t say that, I felt that he viewed the world as either the U.S. benefits and Russia loses, or vice versa,” Bush said. “And I tried to dispel him of that.”

Bush revealed that his new love of painting was inspired by late former British Prime Minister Winston Churchill who also painted in his later years. “I wanted to make sure that the last chapters of my life were full,” he said.