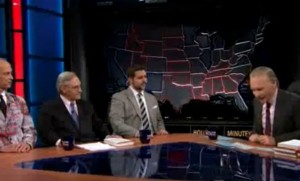 Buried in Friday night’s Real Time with Bill Maher was a stunning revelation by Business Insider political editor Michael Brendan Dougherty, one which might just serve to wake the political press up to the fact that calling out Republican obstructionism is not only their job, but it’s a slam-dunk, smoking gun, blueberry-on-the-face case that voters need to know about. Duly noted by liberal radio and TV host Thom Hartmann, Dougherty revealed that Senate Minority Leader Mitch McConnell is enforcing a do-nothing order in order to avoid the “risk” of the economy improving before November.

As Politico’s Joe Williams told Current TV’s Gov. Jennifer Granholm, political reporters are reticent to call GOP obstructionism out because they fear right-wing static, and because they have a distorted view of the word “objectivity.”

If revelations about the Republican leadership’s Inauguration Day meeting to plot their return to power via “unyielding opposition” to everything President Obama would ever try to do in order to fix the economy, or their plainly evident adherence to that strategy, even on policies they thought of themselves, aren’t enough to wake the political press into reporting that DC gridlock is actually Republican sabotage, maybe this will.

On Friday’s Real Time with Bill Maher, Dougherty revealed that a Republican Senator, not a staffer, not a strategist, but an actual US Senator, told him that Senate Minority Leader Mitch McConnell had issued sickening marching orders to his caucus. Here’s what Dougherty said:

I spoke to a Senator earlier this week, and he told me that, a Republican Senator told me that Mitch McConnell has told his conference that ‘We’re not doing anything, we won’t make a single move between now and the election, because any move could be risky, and all of the shit is sliding down on President Obama.’

So, they’re not going to do anything, they’ve talked about this very clearly among themselves.

That jaw-dropper somehow managed to be almost completely unreported, but Thom Hartmann picked up on it, and now, every reporter who covers the Hill ought to be grilling Mitch McConnell about ordering his Senate colleagues to allow the economy to continue foundering, rather than “risk” improving it. There’s no excuse not to, because they may not watch Real Time, or The Big Picture with Thom Hartmann, but they damn sure all read Mediaite.

Here’s the clip, from Real Time: