Busted? Balloon Boy Says “We Did This For A Show”
video

Busted? Balloon Boy Says “We Did This For A Show” 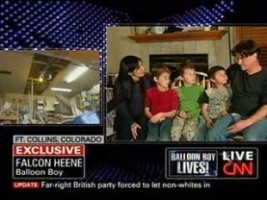 It didn’t take long for Balloon Boy and his spotlight-loving family to tell their story, spending an hour with Wolf Blitzer who filled in for Larry King on CNN tonight.

While Richard Heene and Mayumi Heene (Balloon Boy Falcon Heene‘s parents) mumbled their way through a story about their traumatic day, it took a hide-and-seek-loving six-year-old to finally admit the truth.

“Did you hear us calling your name?” Richard asked his son midway through the show tonight. Falcon said he did hear his father call his name. And here’s the key line, via Balloon Boy himself: “You said…that…we did this for a show.”

For some reason, Blitzer let this slide. Richard tried to stumble through an explanation for that blatant moment of clarity. “Whenever we tell him things like, it’s a bad thing to do, he does go and hide,” he said, which means nothing.

At the end of the interview Blitzer finally got back to that comment from Balloon Boy. “I have no idea,” said Richard. “I think he was talking about the media. They’ve been asking a lot of questions.”

Yeah, like ‘why did your son just out you for starting a national media frenzy’? Blitzer tried to ask Falcon again, and Richard acted offended. “Let me interrupt this real quick, because I think I see the direction you guys are hedging on this,” he said, before describing how “appalled” he was by the inference this might have been, on some level, an act of reality show famedom gone awry.

The next hour, Anderson Cooper addressed the issue, and it is likely to be the tipping point for this whole story tomorrow and beyond. The entire interview tonight showed a father who is, at the very least, a little off (as his appearances on Wife Swap also displayed). The truth is, this story has gone from potentially tragic to sad and disturbing for an entirely different reason.

Also, on a side note, who would have thought this day would end with a screengrab like this? The chyron identifies a six-year-old by the name of Falcon Heene, who is further ID’ed as “Balloon Boy.” Then, on the right, is a National Enquirer-like headline, “Balloon Boy Lives!”