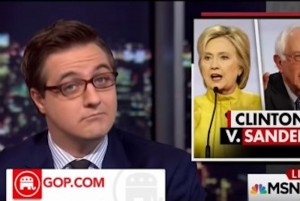 When they’re not relentlessly promoting Donald Trump‘s presidential candidacy, MSNBC spends much of the rest of their time slashing at the tendons of Hillary Clinton‘s bid. That second hobby was on not-so-brilliant display Friday night on the network’s primetime All In with Chris Hayes broadcast.

All day Friday, the anti-Hillary internet was abuzz over former President Bill Clinton‘s slam on President Obama at a rally in Memphis Thursday night, a damaging narrative given the herculean effort the Clintons have made to repair the rift with Obama coalition voters, particularly black voters, that was created during the 2008 campaign. Holding the president close has also become particularly important in view of the upcoming South Carolina Democratic primary.

What was this heinous slam against President Obama? Here’s how Chris Hayes reported it Friday night:

Hayes: If that’s Clinton’s winning strategy, she might want to make sure her husband is in the loop. Bill seemed to go a bit off-message last night in Tennessee while campaigning for his wife.

Clinton: She’s always making something good happen. She’s the best change maker I’ve ever known. A lot of people say, you don’t understand. It’s different now. It’s rigged. Yeah, it’s rigged because you don’t have a president who is a change maker.

The “slam,” in case you missed it, is that by extension, President Clinton must be saying that Barack Obama is not a change-maker. He must be. Mustn’t he be? I mean, it can’t be that MSNBC cut him off in mid-sentence right before he was about to get the crowd to deliver a huge ovation for President Obama, could it? Not in mid sentence!

She’s always making something good happen. She’s the best change maker I’ve ever known. A lot of people say, you don’t understand. It’s different now. It’s rigged. Yeah, it’s rigged because you don’t have a president who is a change maker with a Congress who will work with him. But the president has done a better job than he has gotten credit for. And don’t you forget it!

(Applause so huge Bill has to wait for it to die down, then continue talking because it won’t)

Is there one soul in this crowd that believes that?

Wow, what a monster! This is an edit so egregious, it rivals the worst in dishonest political ads, and surpasses them.

I have nothing but affection and respect for Chris Hayes, so I’m happy to assume that this was the work of some overly-zealous producer, and Hayes was too busy to check it. Whatever the case, though, MSNBC’s treatment of this clip has made Chris Hayes an instant star on the Repubican National Committee’s official Youtube channel, where his reporting of this incident is featured with the title Bill Clinton Slams Obama As Not A “Change Maker.”

It also places him in the company of Politico, which also ran the shortened quote and linked to the RNC’s video of Hayes, and The Daily Caller, who actually included more context than either of the others, but still reported it as a slam.

Liberal blog DailyKos, meanwhile, has had the presence of mind to delete their “slam” story. When you are getting outclassed by the Dailies Kos and Caller, it’s time to think about your life, MSNBC. At a minimum, the reporting needs to be corrected, but really, someone needs to look up the food chain at how things like this happen, and fix it.