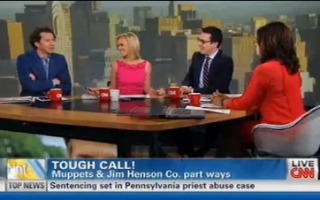 On Tuesday, Starting Point host Soledad O’Brien weighed in on a story that’s been gripping our nation, leaving too many buttery tears to trickle down too many a biscuit crumb-dotted cheek.

You may recall that, earlier this month, Chick-Fil-A CEO Dan Cathy told the Baptist Press that his company is “guilty as charged” when it comes to being against same-sex marriage. The backlash from that interview prompted radio host Mike Huckabee to propose a “Chick-Fil-A Appreciation Day” to “affirm a business that operates on Christian principles and whose executives are willing to take a stand for the Godly values we espouse by simply showing up and eating at Chick Fil-A on Wednesday, August 1.”

Now, the Jim Henson Co. has weighed in on the controversy, officially cutting its ties with the chicken chain over it stance on gay marriage. O’Brien’s panel took on the matter during the show’s “Tough Call” segment, bringing up several pertinent questions, such as whether one is effectively endorsing a company’s stance by buying or using its product or service.

When Ryan Lizza expressed hesitation over continuing to eat at Chick-fil-A , fellow panelist Margaret Hoover said he was “clearly not a consumer who consumes pop culture and art.” And as a conservative Republican who consumes these, she added, she’s often found herself enjoying artists whose views differ greatly from her own.

O’Brien felt this was a false analogy, since you can’t label “food” as art. (Soledad, from one Cuban to another — You don’t find a plate of vaca frita con arroz y frijoles to be a work of art? Especially when it’s slightly overdone so the shreds of beef get all crispy? Come on now.)

Will Cain had a very positive view of the entire discussion, seeing it as an example of imparting change not through government, but through one’s own choices as a consumer.